Boys Will Be Boys, As The Saying Goes 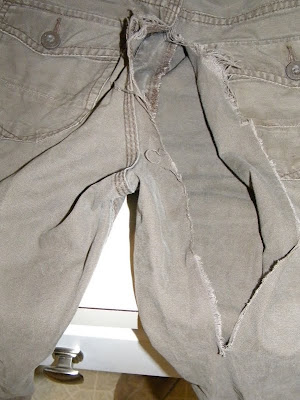 He quite literally was hanging by the seat of his pants!
The other day, I came home from work to find a pair of Nicholas's pants laying on the kitchen table.  I asked why they were there and was told that he ripped his pants.  Nicholas wanted to know if I could sew them...ever since I got my sewing machine all kinds of things have been popping up on my desk all ripped and in need of mending.
I thought it was a little tear, until I took another look.  The entire seat of his pants is ripped.  When I asked what he did, he simply said "I was climbing a tree and fell out."  Then Sarah tells me that he didn't "just fall out", he was hanging by the seat of his pants while they slowly ripped and released him to the ground.  LOL! Could you imagine what that must have looked like?? Or what the boy was thinking while it was happening??
Apparently, he also broke the hook that his bird house was hanging on too, because he was using it as a step to climb higher up in the tree.  The same hook that we just hung up a few weeks prior and he was told at the time it was hung, to not use it as a step in the tree. 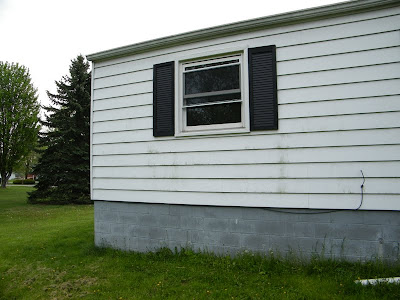 The other day, after a rough, few hours of non stop fighting between Nicholas and Nathan, I finally had enough and made Nick go to their bedroom and Nathan sit on the couch.  Nick kept trying to sneak out.  He was worried about not having his stuff ready for his baseball pictures that we were supposed to go to that evening.  I kept telling him not to worry about it, because if he would just stay in his room for 30 minutes or so, he'd be done....but he wouldn't listen.
As I was sitting at the desk in the kitchen (which has a view of the front entry and the hallway), I saw Nicholas try to sneak past me with a blanket thrown over his head.  I thought it was strange and couldn't figure out how he snuck past me in the first place (as he was going back to his room and not trying to sneak out of his room) - Are you following me here?
Then in the car on the way to the ball field where he was getting his pics taken, I noticed dirt on his pants.  When I asked him how he got them dirty, he replied that he didn't know.
A day or two later, he decided to confess and tell me that his pants got dirty because he snuck out the window and went in through the garage to get his shoes....then threw a blanket over his head and tried to sneak back to his room, because he couldn't get back through the window.   He said he landed on his knee when he jumped and that's how his pants got dirty.  He's lucky he didn't break an arm or leg when he jumped out of the window
I'm thinking this is going to make for one heck of a long summer, if he keeps doing little escapades like these!
﻿
Posted by Charlene Juliani at 10:03 AM

That is one heck of a rip! Things like this always "just happen" to my son. It is definitely going to be a long summer!

Well at least he confessed right :). My kids like to fight all the time too.