It's A Bug's Life

We've been reading alot of Winnie the Pooh books lately, because Nathan loves them and I got a really great deal on 2 almost full sets of books at a yard sale.  We recently read the book The Big Bug Hunt (Winnie the Pooh #14 in the It's Fun to Learn series). 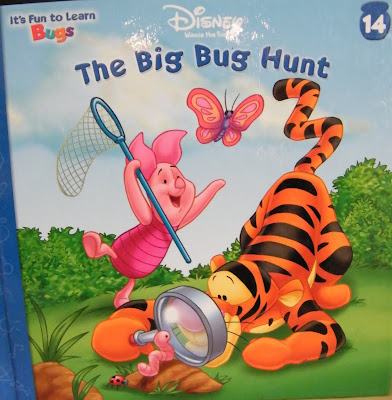 In the book, Christopher Robin has a long list of bugs that he needs to find and so all his friends volunteer to help him bug hunt.  They don special headbands to help disguise themselves from the bugs and grab all their special bug hunting equipment and set off on their big buggy adventure.
I decided that even though I absolutely hate bugs, that the boys would love a big buggy adventure of their own.

We made our own bug antennae headbands, some fun snacks, painted a bug picture and went on an official bug hunt.
To begin with, we started by making some "Dirt" cups.

You will need one box of instant chocolate pudding, 2 cups of milk, a 16 oz package of Oreos, one container of Cool Whip, clear plastic cups and of course, the most important ingredient....some gummy worms.
Mix the pudding and milk according to the package directions.  Set aside for 5 mins.

(Hmmm, looks like somebody did more than just sneak a few Oreos.....)

Nathan's first bug hunt wasn't very successful, so we decided we needed to fool the bugs into thinking Nathan was a bug too.  So, we made our own bug antennae headbands.

(Oh, you know if it involved pink and glitter, I was all.over.this.one!)

(Think he'll fool any bugs???)
Now, he's really ready for another bug hunt!
This time, Nathan and Sarah went bug hunting and found some ants AND a spider....Nathan said they were totally fooled by him, cause he looked just like a bug too! {{Insert some really cute little boy giggles here}}
While they were outside "hunting", I made another snack....Ants on a Log.
But not just any ants on a log (most of my kids don't like raisins and some of them don't like celery)....Oh no, we used pretzel rods dipped in peanut butter and m&ms as the ants.

(Nom, nom, nom)
We finished up our Big Buggy Adventure by painting pictures of....whatelse ---- BUGS!
(well, actually me and Nicholas painted pics of bugs, Nathan said his were scientists (??))

(me and Nick's painting)

(Nathan's painting)
Bug hunting must be hard work.....Nathan fell asleep shortly after dinner, while holding a spoon and "dirt" cup in his hands :)  LOL!
Linking to.....

Posted by Charlene Juliani at 11:42 AM

Though I LOVE the bug headband... I ADORE the bug pudding!! That is such a fun idea and great for boys who like worms! Brilliant.

Thanks for linking up to Kids Get Crafty!!

JDaniel had worm pudding at Mimi's on Saturday. It is the best. I am not big on bugs. I would rather have your artwork than a real bug.

Thanks for linking to Read.Explore.Learn.

Okay my kids asked for a Tine For Tots day- you totally inspired me!

What a great post with such a lot of activities.Thank you so much for linking to the RC!

(There's a badge you can have too!)

Such cute ideas! I can't wait until my little guy is old enough to do some of these. My 7 year old LOVES dirt cups especially with gummy worms! Great post! Thanks!