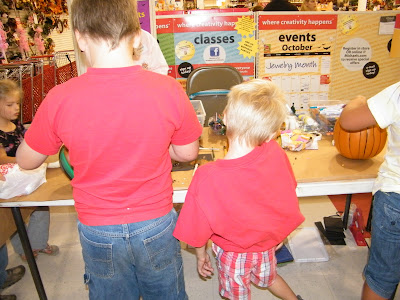 I took the boys to Michael's Crafts today.
They were doing a "Make it, Take it" craft.
$5 for a foam pumpkin. 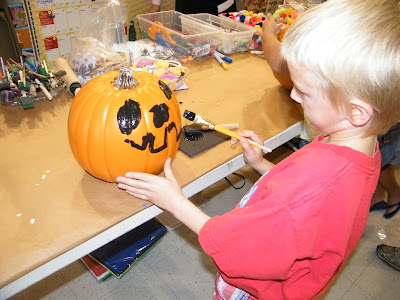 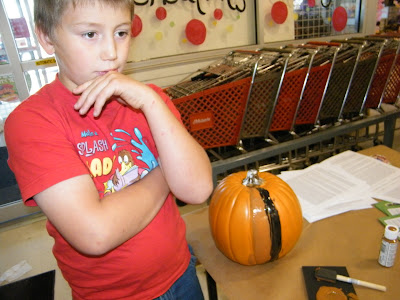 Kids decorated them with paints, glitter, pom poms, stickers, and a bunch of other odds and ends.
Totally worth the 10 bucks I spent to take the two little boys.
Especially when I didn't have to clean up the mess. 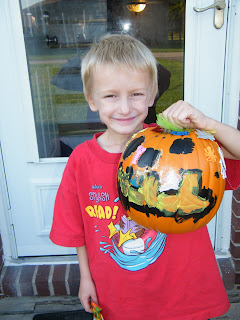 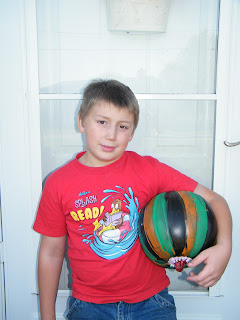 I've been feeling like a total slacker in the blogging department lately...Sorry about that!
I've been seeing a new "girly part" doctor (as Rich calls them) and he recommended that I have ablation to help with all the bleeding I was having (since the insurance wouldn't cover the hysterectomy).  So not only did I have the ablation done, but he did another d&c.
I had some much needed time off from work, but not nearly enough.  Lately, they have been scheduling me for way too many days.  I'm supposed to work 2-3 days a week and I'm getting slammed with 3-4 days...I can't keep up.  I've been so stressed out from work and trying to clean the house (which is a worthless cause at this point) that I can hardly keep up with blogging too.  Kills me, because I love reading everyone's blogs.  I've lost some followers on twitter and facebook, because I'm not posting as much and I guess the more you post, the more people want to read.  And when you can't post or don't have time to post people lose interest and move onto other blogs.  Kind of sucks! But, what can you do.
This whole thing has led me to re-think my so called "calling" in life.  I used to think I wanted to be a nurse.  But I'm realizing that I don't like this whole 24/7 thing (I mean other than parenting).  People are going to get sick, old and need care, etc.  Hospitals and nursing homes never close.  I don't mean to sound ungrateful, I realize there are people out there in need of jobs, but I don't like this one bit.  My heart is home with my family and I miss them.
So...I think in January I will be going back to school.
I plan on only taking one or two classes to start, just to see if I like it.  And I'm thinking about doing something with kids...teaching or other wise.  Nicholas is always saying "Hey Mom, why don't you get a job at our school so you can still be with us."  These kids are missing me. 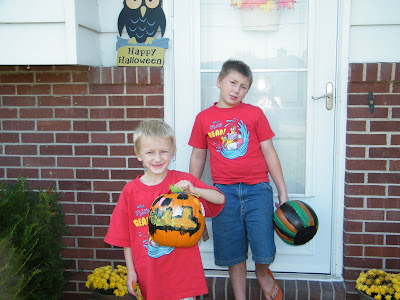 I feel like I don't have time to do crafts and fun stuff with them.  It makes me feel like a bad mom and I don't like that feeling.
Now that most of my readers have probably flown the coop...I'm most likely talking to myself.  But, at least my thoughts are out there and not crowding up my already crowded brain.
I'm still planning on doing the kids crafty link party and have crafts and other things I'll be doing...just wanted to say hang in there with me.  I'm not going anywhere and hopefully you won't either.
Posted by Charlene Juliani at 7:18 PM

I haven't flown the coup... tho I prefer to just bookmark my favourites on my computer rather than follow.
I hope things are looking up for you, and remember, we all go through seasons with our kids where life comes up and we can't do all the thing with them that we want. They know you love them and that is the most important!