no longer a "mini van mom"

Did I share that I got a new car in December?
Yep, I'm super excited....can you tell? It's a pretty red one that I named Ginger.
Ginger is one cool car, she not only has onstar, remote starter and sirus radio, but her own phone number and some other fun features...like she actually talks to you (it's just basically onstar and the phone dialing that she repeats and stuff, nothing too crazy).  The first time Nathan rode in it, he said "this car is kinda creepy, cause it talks to you and cars aren't supposed to talk to you." haha...I guess in a way he's right.  But I grew up watching KITT and the Knight Rider and I've been wanting a talking car ever since!
When Rich asked me what kind of car I wanted this time, I said...definitely not a van. I've been a mini van mom for over 15 years (since being pregnant with the twins). I was ready for something different. And since we don't all ride in the same car anymore and the older two have their own cars now, I got a sedan. More specifically a Chevy Sonic. 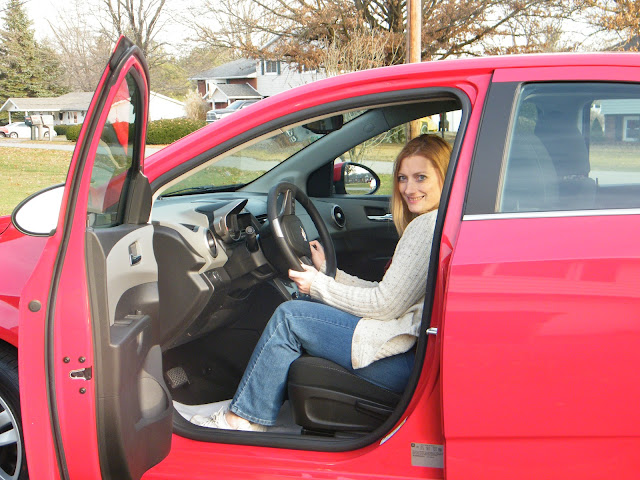 We got the car in the middle of December, it was supposed to be my big Christmas present.  Rich joked around by saying since it was a Christmas present, maybe I shouldn't be "allowed" to drive it til Christmas (I'm thinking someone had a premonition).  I drove it a total of 3, maybe 4 times and then......BAM!!!
Rich drove it to a friend's house to show it off and hit a deer.
Totally smashing in the front end.
I was crushed!
I didn't even want to look at it, but from what I could see, it wasn't pretty.
With the holiday season and our big fat stupid insurance company it took until February to get her all fixed up.  I finally got her back and I secretly keep thinking that Rich isn't allowed to touch her....hahaha, even though I know it wasn't really his fault.
But, she's back and she's pretty....her little face lift did her wonders and I'm one happy lady again.
I would say it feels strange not driving around in a big old minivan, sitting up higher in a car and all that room.....but to be totally honest, I'm too enamored by my new crush to give a hoot about that old mini van (Sorry Gracie - you did a good job, enjoy your retirement, that is until the twins get their licenses and come knocking on your door).
This mom is no longer a mini van mom and loving it!
Posted by Charlene Juliani at 10:41 AM

we should celebrate the end of the "Mini Van Mom" era!

I, too, grew up watching KITT (the Knight Rider) so I am kind of used to talking cars. Enjoy your new Chevy ( I drove a little Chevy Geo Metro when I lived in St Louis MO), and I wish you lots of safe rides!