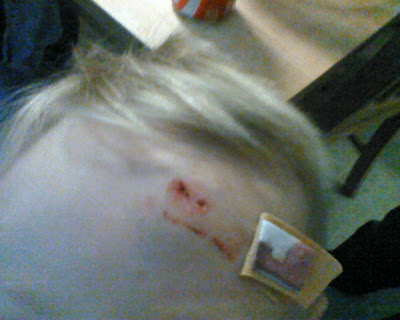 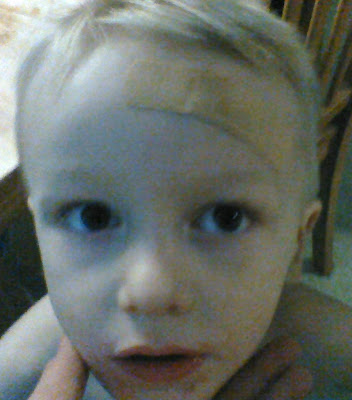 I don't know what it is with this family and hitting our heads, but I really wish it would stop. This afternoon, I told Nicholas to take Nathan outside for a little bit so I could get some stuff done. After about five minutes, Nathan comes inside screaming. He had blood dripping down his face.

Apparently, he tripped and hit his head on the concrete steps out back. He had a small gap open. I asked Rich if he thought it might need stitches and he said he didn't think so. Amanda and I cleaned him up and put some ointment on his cut and a bandaid of course. He also got a heaping dose of Children's Motrin and other than saying he has a hole in his head, he's fine.

Just another thing to be thankful for today, I guess.

Oh, and by the way...he did it again a few days later. Same spot too. I was leaving for work and he ran up the stairs to tell me good bye when he tripped and fell and busted his head again. Seriously, wasn't once enough?
Posted by Charlene Juliani at 6:06 PM