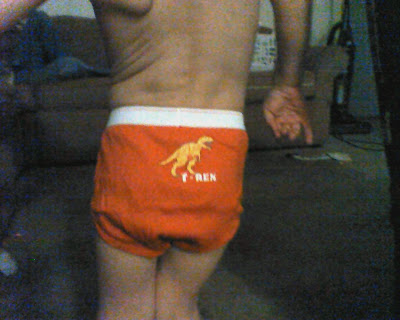 What's that you say?

It didn't take very long, once we started. We bribed him...ALOT with small toys and candy, but it worked. He was just peeing on the potty and then, it seemed as though poop episodes were getting fewer and farther between (and no...he didn't poop and hide it, like he did at the beginning...no, this time, he was actually pooping on the toilet). I'd say it took about two months with one or two small accidents before he was and is completely trained. He still wore the Pull Ups at night and he was sooo used to wearing them that he wanted to wear them all the time. I stopped buying them and that forced him to wear his cloth training pants.

A few nights ago, Rich and I went shopping for socks and undies for everybody and I picked up some little ones for Nathan. He is so in love with his new big boy underwear. LOL! It was hilarious the first night he had them. He kept changing into different ones. No sooner did he have on one pair than he turned around and had another pair on. He did that for about two days. It was funny watching him "model" all his new underwear.

I'm so stinkin' proud of him!! He did great!! And the best part of it all, is I, I mean we don't have to change any more poopy pants. Well...except for me, I still have to do when I'm at work. But hey, at least it's not all the time, right?
Posted by Charlene Juliani at 5:59 AM