In my previous life, you know before Nutrisystem ;) I lived for vending machines!
Granted, they were kind of like another little lie I would tell myself (or others if there were people in the room), my favorite lie I told myself was "I only eat junk food while I'm here at work....I don't eat like this at home."
ppffftttt....yeahhhhhh right!
One of my favorite things about Nutrisystem is the convenience.  The meals are already made, so all you have to do is reach in the freezer or cabinet and grab something, then microwave it....easy peasy! For me, the hardest part is choosing which meal I'm going to eat that day.

On the days that I have class, this is the best thing ever.  I pack my lunch, because I am at school all day on Tuesdays and Thursdays, I usually pack a cheese stick, a piece of fruit and a can of soup or a pasta bowl.  One day, I forgot my lunch.  Not only was I freaking out, because I forgot my lunch, but I also only took enough money for parking that day.  Thursdays are my long day too, meaning I'm at school for two extra hours, getting home around dinner time.

So here I was starving with no real money to eat at any of the food areas at school.  Scrunching through my bag I found some change and headed to the vending machine, hoping to at least find some pretzels.  What I saw was 8 different candy bars, 8 bags of chips (no pretzels) crackers, peanuts, rice krispie treats, and about 3 different varieties of pop tarts....yuck.

This time, however, I couldn't decide...nothing really looked appetizing to me nor was there anything I would have considered nutritious in the slightest bit.

I went with the peanuts and what I considered the lesser of all the evils, the crackers - not that the crackers were anywhere healthy, but they did have peanut butter in them and even though the pb was probably laden in sugar, I could still count it as a protein and the crackers while not whole grain (in the slightest) could be considered a carb, not a smart carb, but a carb no less.  The peanuts of course were protein and they were fine to eat....even though the serving size was way off.

So ended my love affair with the vending machines.

I wish I could say that since I started this diet/lifestyle change that I never strayed or cheated on it...But I can't.  And I don't really consider that a horrible thing.  One candy bar in five months time, isn't that big of a deal, at least not to me.  It means that I now have a healthier attitude towards food.  I don't look at junk food and think of it as food...or make up silly ideals and say "well chocolate is technically a bean, so....".  To me, it's junk - plain and simple.

I don't tell myself little lies about it anymore either.  Do I think one little candy bar is going to hurt my chances of losing weight for that week? Nope! (and it didn't by the way).  Did I beat myself up and throw a pity party for my lack of self control? Nope! I wanted some chocolate, so I grabbed the candy and I ate it.  Did I think it tasted horrible? Nope! (it was pretty DAMN good lol)....it satisfied that little bit of chocolate I was craving.  End of story.  It's all good!

I realize that alot of the junky food I ate was crap and to me actually tastes like crap and I don't want to eat it....but there are a few things out there that I do still like and as long I have a healthy attitude about it, I can handle eating it.  It was when I was unhealthy that I couldn't deal with it, that guilty feeling and that constant gnawing, knowing I shouldn't have because....that made me want it even more.  Now, I know I can eat one once in a blue moon and the sky isn't going to fall down around me.  I have learned the fine art of moderation. 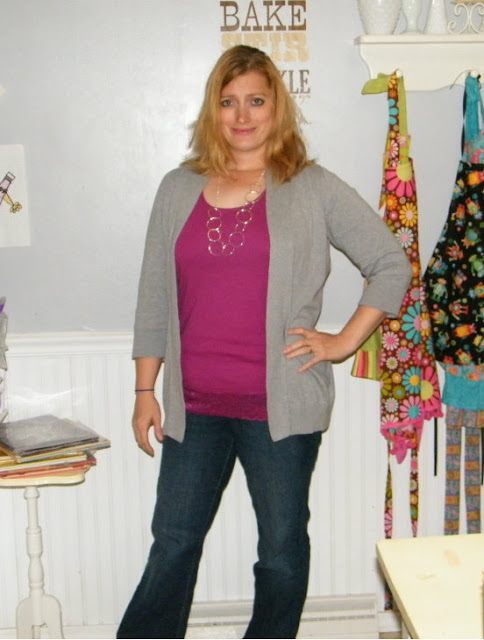 It's not just about the food....it's about the attitude!
My Stats

Posted by Charlene Juliani at 9:43 AM

Wow, great job Charlene! Us mom's know how hard it is to stick to a weight loss routine. And you hanging in there is an inspiration, keep it up!