What are some of your favorite childhood memories? Are there certain things you do now that remind you of your childhood days? Are there times that your child does something and you flashback to when you were a child? Do you do things with your children that your parents did with you?
Today, I took Nathan to the doctors for a routine appointment.  He had to get all of his shots updated so that he will be ready when school starts.  He ended up getting four shots...four years old, four shots.  Poor baby! The nurse gave him a little pinwheel to blow on while she was sticking him.  You should have seen his little face, tears streaming down his cheeks, trying not to cry while concentrating on blowing his little pinwheel.  That's the kind of stuff that breaks a mother's heart.

I also had to get some blood work done, so since I was in the area, I went ahead and got that done too.  The lady that did it was asking Nathan about his pinwheel and I told her it was because he got shots.  She felt so bad that she gave him a lollipop.  Then, we went to Target to check out the dollar section (you know me and my obsession with Dollar stores and sections).  I also was looking for a cookie jar that I had seen previously.  It was marked down to $2.48, I couldn't pass it up a deal like that and ended up getting two of them.  We found some other cute things, that I will post about another time.  At the check out the woman asked if he brought the pinwheel in with him and I said yes, it was his treat for getting shots.  When I told her he got four of them, she felt bad and offered him four stickers (one for each shot), and two mini Hershey bars. 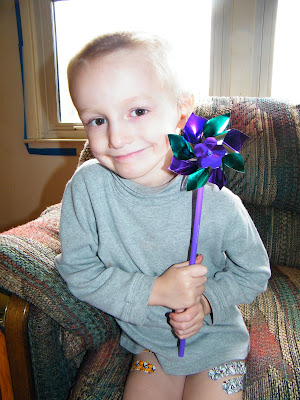 Leave it to my kid to figure out how to milk the sympathy for getting shots hahaha.  He ended up with four stickers, a pinwheel, a lollipop, 2 mini chocolate bars and the nurse gave him not only a coupon for a free dessert at Bob Evans, but also a coupon for a free kid's meal....my kid made out like a bandit and it didn't stop there.  And mommy got squat!

As we pulled into the driveway, I saw that he had fallen asleep and it tugged on my heart a bit more.  Poor little guy must be in pain and worn out.  So I carried him into the house.  At the top of the stairs I hear this little voice say, just put me on the couch mom.   Yep, Mommy got played!! My little bugger wasn't sleeping.  He was just faking it, so I would feel bad and carry him.  He was probably thinking - Suckerrrr! the whole way into the house.

This got me thinking about when I was a little girl and the many times I would pretend to be asleep so my dad would carry me into the house.  I remember the day when I was too old for it anymore too (man did I hate that).  I loved those times.  It gave me a sense of security.  It made me feel loved and special.  Seeing Nathan do it today, not only reminded me of those days, but also of my dad.  I hope my kids will look back one day and remember these times just as fondly as I remember mine.
Posted by Charlene Juliani at 1:13 PM

Hi Charlene I'm Tanya
from the GrabBag!I'm also
from Toots-Tuesday! Boy do
I remember the days when my kids
use to get shots and make out like
a bandit for the rest of the day!
I also remember when my Daddy use
to carry me to bed when I would
fall asleep on the couch:0)How
I miss those days.

Something about Mom or Dad carrying you just feels fantastic, doesn't it? I miss that too. :(

I used to always pretend to be asleep but it was to get out of helping out with chores... and yeah it worked :)

I am following you back! YOu have a lovely family! :)

I remember so clearly pretending to be asleep so my dad would carry me in from the car.
You have a lovely family...reminds me of my 6 children.
Visit me @
www.happyfamilyhappykids.blogspot.com

What reminded me the most of my childhood days was when I took my son to an amusement park last year. That park had been around since I was a kid, and it had the EXACT same rides. I remember going with my parents and having a blast, just like he did. We even went with my parents and my father rode the little roller coaster with my son just like he had many years ago with me. I sat in front of them and took pictures. It was awesome!