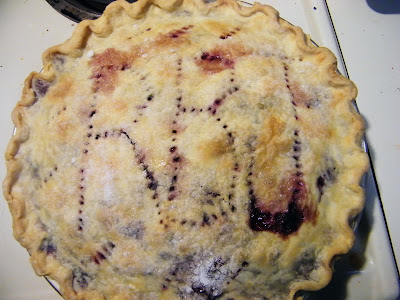 Ever since I made Rich a blackberry pie at Thanksgiving, he's been craving another one. He ate the pumpkin too, but he really loves blackberry pie (and coconut, but I can't make a decent coconut pie to save my life (I know, I should be so ashamed lol). So, I promised him I would make him another pie for Christmas. And then Christmas came and went and no pie. Then another week went by before he mentioned the pie again and I, yet again, promised I'd make it.

And still another week went by and he mentioned it again last night. So, can you guess what I did this morning? Yep, I made his darn blackberry pie! Every time I make him a blackberry pie, I use his initials as vent holes....because it is his pie (although I sneak a piece or two of it, before he eats it all...shhhh!).

Don't tell anybody, because if I had to do it all the time it would take the fun out of it, but I LOVE baking pies. And not to toot my own horn, but I have never used the canned stuff for pies (It just doesn't taste the same as the real thing). Rich's grandmother taught me how to cook and bake. That's why most of the time I just dump stuff in a bowl and mix it up without measuring and without a recipe. Because that's how she did it. She taught me how to make the pie crust that I still use today (half butter/half shortening, super cold water, flour and a dash of salt), with a sprinkle of sugar on the top crust before baking.

I even have her old rolling pin. She gave it to me to keep before she got sick. I love that old thing, it's in really nice condition too. I think part of the reason I love it and part of the reason my pies are good, is that there is a little bit of Grandma's magic in it. Maybe one day I can pass it down to one of my own grandchildren. 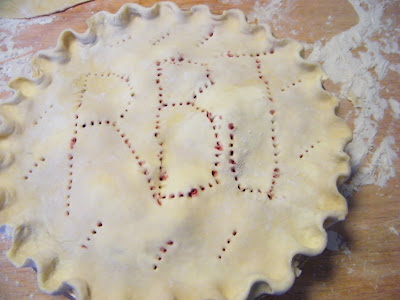 Posted by Charlene Juliani at 6:53 PM

1/2 a WHAT of butter? 1/2 a WHAT of shortening?? Can we get a GUESStimate of the amount of flour??
Please please?? Those berries do look yummy!

ohhhh, I am having a severe craving now.... there goes the New Year diet :)

Angelica, Sorry I didn't post this, but to make 2 pie crusts: 1/3 cup butter, 1/3 cup shortening, 2 cups of flour and a dash of salt. Use two knives to "cut" the butter and shortening into the flour/salt mixture. Then add cold water about 7 or 8, (sometimes 9 TBS) to start with. Just stir it around (or you could use your hands) until you get the right consistency. Then form 2 balls of dough and roll it out with flour. It takes some practice to get the consistency right, but once you get the hang of it...it'll be easy to see how much water you'll need.

For the berries, I add a cup of sugar, sometimes a little more and about a quarter cup of flour.

My husband loves blueberry pie. His parents pick fresh blueberries every year and send them to us. I have frozen (fresh blueberries) all year long for special occasions for my husband (b-day, holidays, anniversary, etc.)