If you want to gas up your car, there are two gas stations in my town. One that is directly in town, called Allstar Express, they used to be called Dairy Mart a few years back and that is what my family still calls the store. This little gas station has a convenience store attached to it and they also have fresh food they sell, like burgers, fries, etc.

We also have another gas station/store, it alittle out of town, and its called Sheetz, it has the same concept as the first one, but alittle more well known on the regional circuit. Gas is generally the same at each station. Both are self serve. Our only gas station that had full service (check under the hood, oil and windows) closed a few years ago. We do have another station that still does that to a certain degree, but they are a few towns over in Fayette County. 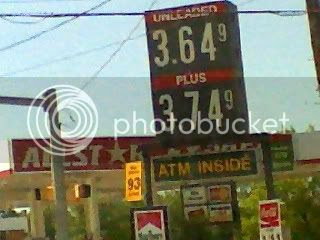 A great way to save on gas here, is at the Giant Eagle Go Station. This is a pretty good deal, the whole premise behind it is that you go grocery shopping at Giant Eagle and for every $50 dollars you spend, you get 10 cents off your gas. This is good for the pharmacy as well. So if you are big grocery shoppers or have a lot of prescriptions, you can add up the savings pretty quickly. There are actually two grocery stores here that do that. They compete with each other. The only bad thing is that participating gas stations for the two stores are out of the way. But it is worth the trip, if you saved enough points.

The good thing about living in a small town is that there are alot of things to do within walking distance. We usually go to the library and the playgrounds. We have a few playgrounds here that (even though we have our own swingset in the backyard) the kids like to go to. We also have a public swimming pool that is in a park down the road. The kids love to ride their bikes while we are walking around. Another big hit is the local Dairy Queen, we all love going for walks to get some ice cream.
Posted by Charlene Juliani at 1:15 AM

What you mentioned are all the reasons that I love the small town, too! And I never expected to...country girl that I am. ;)

I love this blog adventure...how fun!

I try and use the Giant Eagle stuff whenever I can. But their prices are so high, sometimes it's not worth it. Funny how gas can be so similar or soooo different!

Hi! Stopping by and visiting your neck of the woods. :-) After I posted that I buy gas anywhere between 3.42 and 3.55, I had to put gas in at 3.65 this morning!! ERRR...Sometimes I wished I lived in a small town myself...but then my kids would drive me insane!! LOL

Hi, just wanted to stop and say hi. Thanks for visiting me.

Hi! Thanks for stopping by yesterday, thought I'd pay you a visit back. Glad to see gas is not too too bad for you guys.

Hope to see you passing thru again. I would love to add you to my blog roll to read regularly if you want to do the same...

Here is the linky thing I was talking about. She is suppose to start a new one each day. Ack!

I would love to be able to walk to all the places you go. Maybe I will move there. Oh wait, no more moving for me!