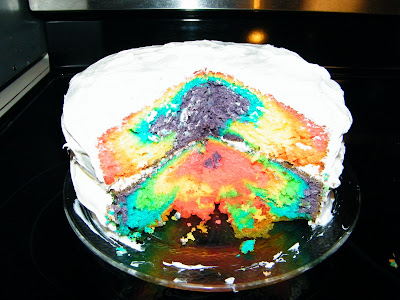 I took two white cake mixes and prepared them according to package directions in a huge mixing bowl.  Then I separated the batter by putting one and half cups of batter into six smaller bowls (one for every color).  Then I mixed in the food coloring - I used the gel kind like this: 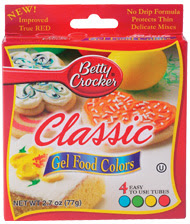 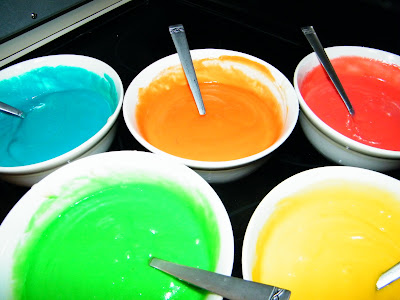 (I made a purple one too,  it's just not in the picture)
Then I took two round cake pans and greased and floured them.  Preheated the oven according to the cake package directions.  And then the fun began...
I used 2/3 cup of the red batter and put it in the bottom of the first pan, then 1 cup of the orange and 1 cup of the yellow.  In the second pan, I put 2/3 cup of the purple batter, then 1 cup of the blue and 1 cup of the green.  I dumped the remaining colors in order in the first pan (the rest of the green, blue and purple) and the second pan, I dumped them in reverse order (yellow, orange and red)
It'll look like this in the cake pans: 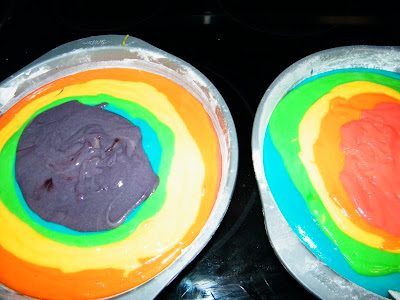 Then bake it according to the directions on the cake box.  After it cools, you can put the frosting on top.  I just used regular frosting to make it easy. 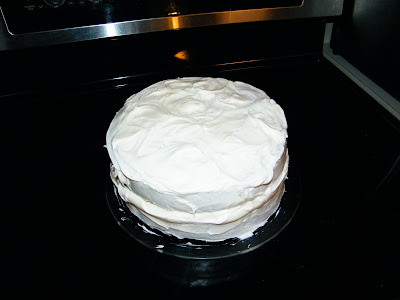 The author of this recipe explains things better and also uses a weight watchers method by adding soda and omiting the eggs, oil and water.   There is also a recipe for WW frosting, but I just used the canned stuff, like I said.   You can find the original recipe here.  This seriously will become our birthday cake from here on out, if the kids want.  Such fun! I've seen people make cupcakes like this too, but I figured that would be to much of a pain in the butt and time consuming, so I just made the cake haha.  Happy Baking!!
Posted by Charlene Juliani at 9:35 PM

That sounds pretty easy (and fun!) If you want a good homemade icing recipe (that's good for decorating), my grandmother's is awesome!

That looks so good!

Kristen I have a buttercream recipe that I usually use, but I didn't have alot of time to throw it all together, so I cheated and used the canned stuff I bought for cookie frosting instead...But thanks. I might take you up on it, anyway. I'm always looking for new stuff.

that is so cool!!!
next time I have to read your blog with no kids around, lol, because not they are bugging me to make one this weekend, lol

It came out so well! I am already planning on making the cupcakes for J's birthday next month... LOL!

That came out awesome - it matches your blog! I think I will give it a try on my daughter's birthday!

Michelle, I didn't realize that LOL!

Thanks for re-posting. I think the girls and I will make this for dessert today!!

Thanks for re-posting. I think the girls and I will make this for dessert today!!