back to school adventures

It was the first day of school today. Nathan has been so used to having his big brothers and sisters around that he really didn't know what to do with himself. He was a wild child and bounced off all the walls. To keep him from getting into the lunch box stuff, I bought him some Dora Animal Crackers. Which he ate, while watching Dora and Diego (if you don't know who they are - you are so very, very lucky).

I had been doing laundry all day long. I had been trying to fold the clothes straight out of the dryer and then having the kids bring them upstairs. But with no one home but me, Rich and Nathan I didn't want to stay downstairs for too long. Nathan doesn't really like watching the downstairs (family room) tv. So I was dragging basket after basket of laundry upstairs. At one point I went down to switch the clothes from washers to dryers, when I saw water shooting all over the place. Apparently one of the washers hose thing that runs from the water thing to the washer was broken and sprang a leak. There was water all over the floor, the walls, the washer. I managed to turn it off but there was still alittle bit spraying out of the hose, so Rich had to replace it.

Then I went out to get the mail. I left Nathan inside (and meant to grab a set of keys, because he has been locking the door lately). As soon as I crossed the street I heard Nathan laughing. He said "ha ha mom" and closed the door. I knew as soon as he did it, that he locked me out. The cars were locked, so I couldn't use the remote to the garage. All I could do was pound on the door until Rich heard me. The whole time I could hear Nathan giggling. When Rich heard me knocking, he said Nathan told him that he locked me out. Rich laughed. It was kind of funny. Boy, I don't think I'll forget to grab the keys again.

Earlier in the day, after Nathan and I had dropped off the kids and were getting into the car, I noticed his shirt was on backwards. And he had juice spilled on the front of his pants. That must have looked real good at the school. Note to self, don't ask Zachary to help dress his brother anymore.

At the end of the day (around 2:30) Nathan finally conked out. It sure did take him long enough. Not that he takes regular naps or anything (I wish). But I figured he would eventually crash, since he was so wound up most of the day. He fell asleep, in all places, a laundry basket (what is it with this kid and sleeping in baskets). No need to buy a bed for him, just an extra large basket. And for the record, he did have clothes on during the day, he just stripped them all before he laid down. 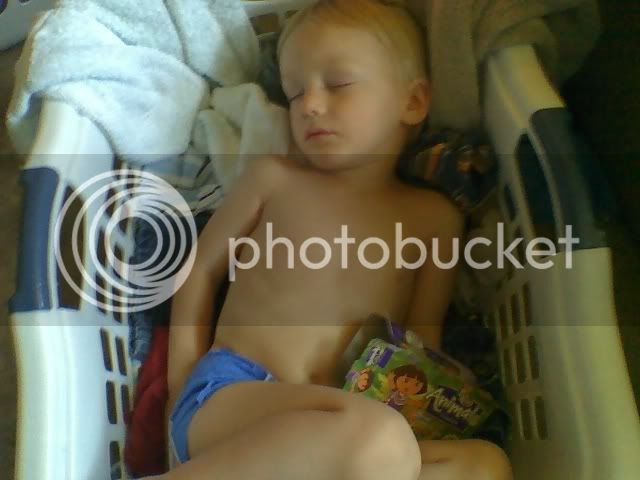 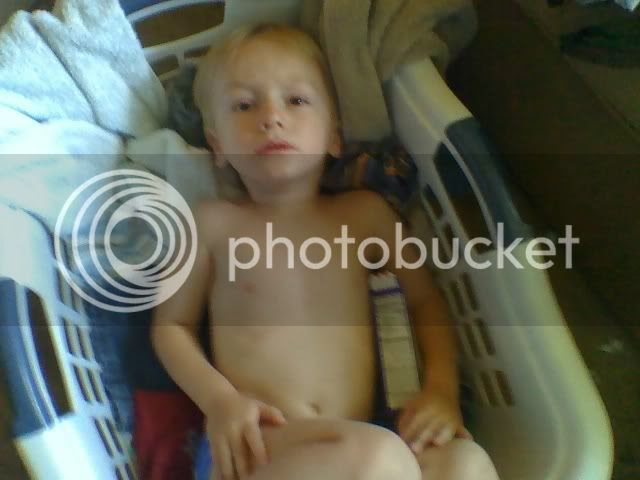 Posted by Charlene Juliani at 10:13 PM

Our lives sound similar...... my toilet flooded yesterday so I was up to my ears in.....

Awwwwww, he is so cute!