I was going to take the little kids to watch the pet parade (it's part of Coal Show week), plus Amanda and Anthony were marching with the band. So, I'm running around trying to get me, Nicholas and Nathan cleaned up and ready to go. I couldn't find Sarah or Zachary anywhere. Which freaked me out, even though I figured they were down the street at a neighbor's house. But they didn't tell me they were leaving, so I was worried about them.

Rich was home taking a nap, so I figured I would just write a note for Sarah and Zach and left. I get to the parade and get the boys out of the car. The damn parade was over. We missed it, because I was worried about the twins and trying to drive around looking for them. I get the boys back in the car and decided to drive over to the school to pick Amanda and Anthony up. I backed out of the parking spot and right into a wall.

Yep, into a wall! 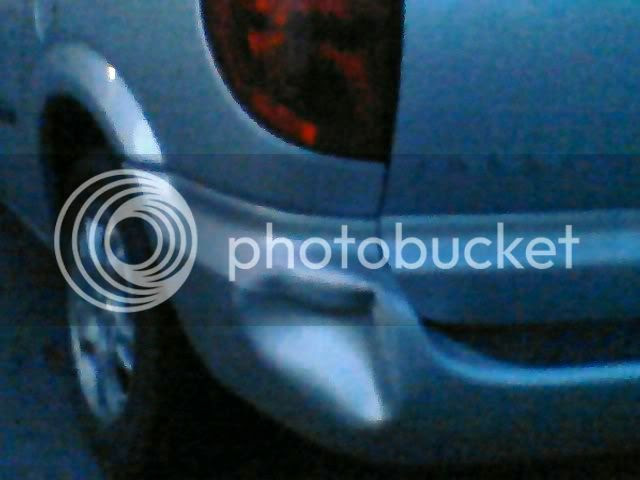 I think I was just so stressed out about the boys missing the parade, getting to the school on time, and the twins not being home that I wasn't paying attention. I left a good dent in the bumper!

I came home practically in tears, told Rich what I did. He told me not to worry about it, because it was an accident. Then he teased me by saying "you know most people look behind them when they are backing up." Yes dear I know, Shut up! Rich said since its that hard plastic, he might be able to pop it back out. That was bad enough, right?

Later, I took the two little boys to the grocery store. As I was leaving the parking lot, some Butthead decided to cut me off as I was pulling out. Then he almost side swiped me, pulling in front of me. And do you want to know the really sad part about it - there were so many cars in front of him that he couldn't even use the excuse of being in a hurry or speeding or someother bullshit story. He was ten feet in front of me the whole way home. He was just being an asshole!!

I burned freakin' dinner too!

I am so going to enjoy that chocolate that I bought at the store, believe me!
Posted by Charlene Juliani at 8:11 PM

Thanks for the hugs, I need them!!

Thank goodness that you're all OK. And I know that sounds so sappy especially after such frustration, but from here that's what I'm thinking. Hugs from this way, too!

Thanks again for all the hugs!